Takashi Murakami is Known for his collaborations with pop icon Kanye West and fashion house Louis Vuitton, and for vibrant anime-inspired characters, Japanese artist Takashi Murakami (b. 1962) has blurred the boundaries throughout his career between high and low culture, ancient and modern, East and West. The MCA is proud to present a major retrospective of his paintings, featuring fifty works that span three decades of his career, from the artist’s earliest mature works—many of which are being shown in North America for the first time—to his recent, monumentally scaled paintings. The exhibition, titled Takashi Murakami: The Octopus Eats Its Own Leg, shows how Murakami’s art is rooted in traditions of Japanese painting and folklore and highlights the artist’s careful attention to craft and materials. It also showcases the artist’s astute eye for the contemporary influences of globalization, media culture, the continued threats of nuclear power. 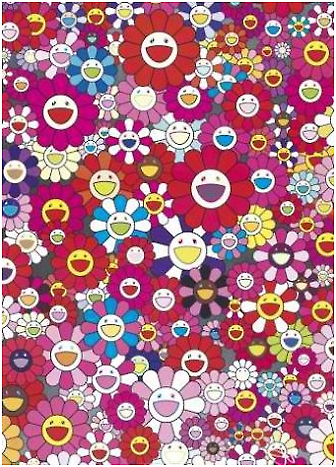 Murakami’s increasingly complex paintings are filled with characters and scenarios both cute and menacing, saccharine sweet and critically acidic. They are evidence of a conflicted, concerned, and committed commentator on cultural production who recognizes that any effective “hook” is bound to have a sharp point. Throughout his career, and especially over the last ten years, Murakami has combined spectacle with sophistication, transforming the art world while establishing his own reputation within it.

Takashi Murakami is one of a handful of artists that has transformed the landscape of contemporary art through his engagement with ideas surrounding production and the marketplace. Alongside his studio practice and the invention of a conceptual style of painting he termed “Superflat,” Murakami founded the Hiropon Factory in 1996, which functioned as a school, studio and factory. In 2001 he renamed the company Kaikai Kiki Co, with the main branch in Tokyo and a satellite office in Long Island City, NY. Kaikai Kiki Co. is more than an artist’s atelier, supporting Murakami’s multifarious productions (including curatorial projects, collaborative projects and animation works), a whole stable of Japanese artists that he represents, as well as the management of the GEISAI art fair which presents the work of artists who represent themselves in solo booths, rather than galleries that represent artists. He has become a veritable industry unto himself. One of the most well know contemporary artists working today, Murakami is represented by a powerhouse triumvirate of galleries with outposts around the globe including Gagosian, Galerie Perrotin, and Blum & Poe. He has had solo museum exhibitions at some of the most venerated institutions in the world including the Museum of Contemporary Art, Tokyo (2001); Museum of Fine Arts, Boston (2001); the Fondation Cartier pour l’art contemporain, Paris and the Serpentine Gallery, London (2002); Museum of Contemporary Art, Los Angeles (2007), which traveled to the Brooklyn Museum (2008), the Museum für Moderne Kunst, Frankfurt (2008) and Guggenheim Museum, Bilbao (2009); and Château de Versailles, France (2010). Last year he exhibited the sprawling Murakami – Ego exhibition curated by Massimiliano Gioni at the Alriwaq Hall at the Museum of Islamic Art in Doha, Qatar, and is currently showing Takashi in Superflat Wonderland at Plateau, Samsung Museum of Art, Seoul Korea through December 8th of this year. Murakami lives and works in Tokyo, New York and Los Angeles. Many works by the artist have been sold at auction, including ‘My Lonesome Cowboy’ sold at Sotheby’s New York ‘Contemporary Art Evening Auction’ in 2008 for $15,161,000. There have been numerous articles about Takashi Murakami, including ‘The art of the album cover: New book features more than 500 examples, from Patti Smith to Kanye West’ written by Jessica Gelt for Los Angeles Times in 2017.