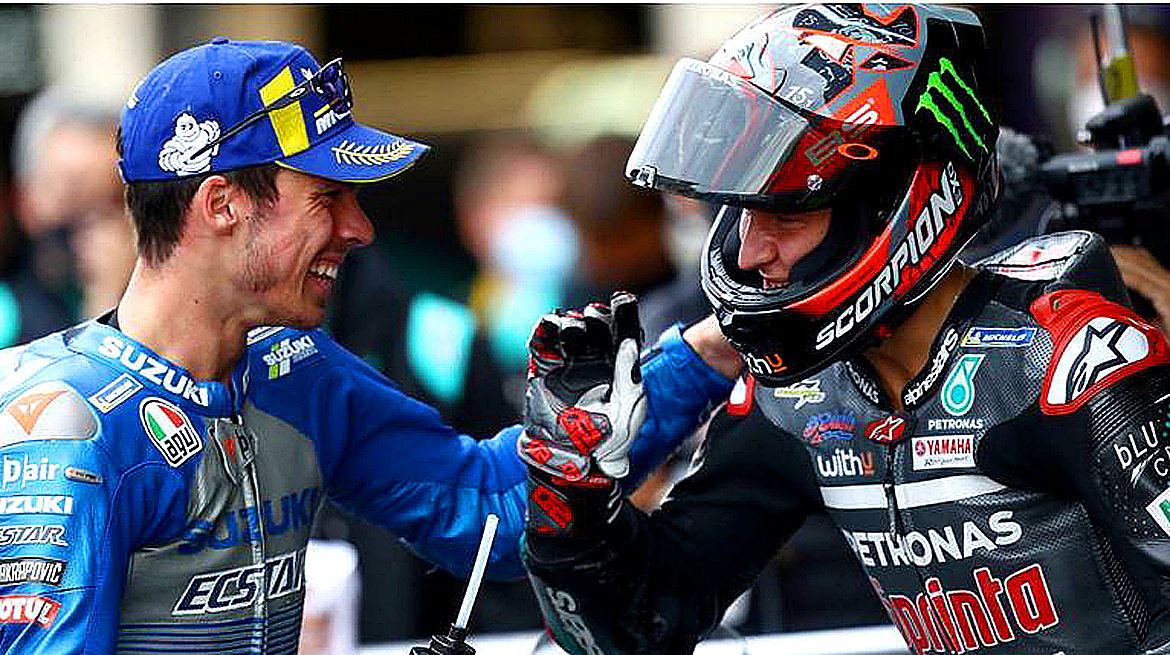 Suzuki and Yamaha for the MotoGP title – for the first time since Rainey and Schwantz.. Mir and Quartararo after Sunday’s race – just nine-tenths separated them. Image Credit: Petronas SRT, 2020.

Suzuki and Yamaha for the MotoGP title – for the first time since Rainey and Schwantz.

Suzuki’s GSX-RR and Yamaha’s YZR-M1 are ruling MotoGP 2020 for one big reason – those black round things at the back of the bikes: 2020 Catalan GP insight part 1.

Five races left and the battle for the 2020 world championship is turning into a Suzuki versus Yamaha duel. Which is a bit of a novelty. The last time that happened was before most of today’s MotoGP riders were out of nappies. It was 1993, to be precise, when Kevin Schwantz on Suzuki’s RGV500 battled with Wayne Rainey on Yamaha’s YZR500 for biking’s biggest prize.

There is one simple reason why it’s Suzuki versus Yamaha for the 2020 MotoGP title – and you know I’ve already told you this – it’s Michelin’s 2020 rear slick. The tyre’s softer carcass has nobbled the Ducati and Honda V4s, which dominated the last few seasons, and rejuvenated the Suzuki and Yamaha inline-fours, which mostly struggled in recent years. Hence Sunday’s Catalan GP result: Yamaha riders Fabio Quartararo and Franco Morbidelli first and fourth and Suzuki riders Joan Mir and Álex Rins second and fourth. (This was the first Yamaha/Suzuki top-four lockout since Valencia in October 2000!)

It’s no big deal – in spec-tyre motor sport it’s impossible to build one tyre that will work exactly the same with six different machines. And who’s to say that the recent domination of MotoGP’s V4 wasn’t because Michelin’s previous rear slick favored them? In case you don’t believe it can be that simple, here are a few statistics to prove the point, because you won’t understand what’s happening in the 2020 MotoGP championship until you get this.

Between Michelin’s arrival in 2016 and the end of last season – that’s 73 races – there were just three podiums monopolised by YZR-M1 and GSX-RR riders. Already three of this year’s eight podiums have been filled by inline-four riders. Last year 69 per cent of all MotoGP top-three finishes were scored by V4s. So far this year 63 per cent of top-three finishes have been scored by inline-fours. That’s a huge turnaround.

I’m counting podiums, instead of wins, because this underlines the fact that it’s not merely the absence of Marc Márquez that’s changed the balance of power in MotoGP.

Márquez noted at Jerez that the new rear tyre makes life harder for him and we all know what Ducati’s Andrea Dovizioso (runner-up to Márquez in 2017, 2018 and 2019) thinks of the tyre.

Petronas Yamaha team manager Wilco Zeelenberg thinks otherwise. “I don’t recognise Ducati’s and Dovizioso’s problems because the tyre works better for us,” he said at Barcelona. “When I hear Dovi explaining why he cannot perform and he cannot brake so late, this isn’t a problem for us because the rear has more grip, so our bike stops better. Also our bike needs to carry corner speed and the tyre helps in this area.”

Of course, Ducati isn’t standing still. It has Pecco Bagnaia using his new rare-groove braking technique that allows him to enter corners at speed without losing the front and then use the front tyre’s grip to turn the bike. He was the fastest rider of all at Misano, but he struggled at Barcelona because the track is so slippery. “Our bike is very strange with no grip,” he said.

Bagnaia’s Pramac team-mate Jack Miller, who beat the Italian to fifth place by a fraction of a second on Sunday – they were the first V4s home – is also getting there. “We are still trying to understand how the tyre how is working and we are gradually getting there – the smoother I am the faster I go,” said the Australian, whose riding technique is more aggressive than most. “You can’t do anything to upset the tyre. You can’t put the tyre into the corner aggressively and you can’t open the gas aggressively. You have to do everything so silky smooth – that’s the biggest thing.

“Especially at Turn Nine, one of Barcelona’s key points, and at Turns Three and Four, if you put the bike into the corner too aggressively it starts to slide immediately, so you have to put the bike on angle nice and smoothly. And you can’t have too much engine-braking – you’ve got to let the rear go free a bit.”

Information and Image are shared from an Article by Mat Oxley, published at Motorspot on September 28th, 2020. Image Credit: Petronas SRT, 2020.