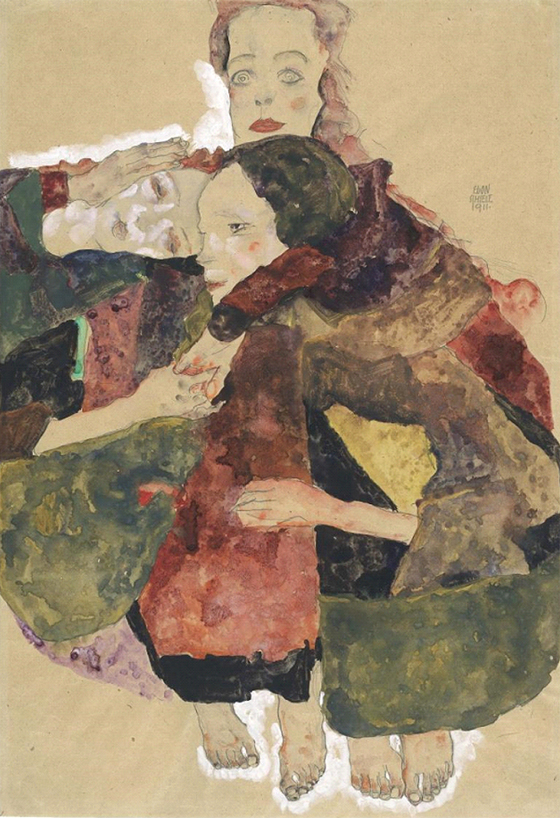 Klimt & Schiele, Royal Academy review – the line of gauntness. Elegance and brutality converge in drawings from the Albertina Museum, Viena.

The most touching tribute to the relationship between two giants of early 20th century art, Gustav Klimt and the much younger Egon Schiele, hangs in the first room of this fascinating exhibition at the Royal Academy  – Schiele’s poster for the 49th Secessionist exhibition in 1918. It shows a group of artists around a table, an empty chair at one end – that of Klimt, who had died of pneumonia in February. Schiele has included his own ramshackle self seated at the opposite end, gazing at the place which should be occupied by his friend, mentor and inspiration, not knowing that within months the Spanish Flu would kill him too, aged 28, three days after his pregnant wife.

Egon Schiele was blown away when he first encountered Klimt’s work, years before he actually met the artist. Perpetually broke and scouting for society patrons, he once tried billing himself as “the silver Klimt” – no gold leaf, and very much cheaper. 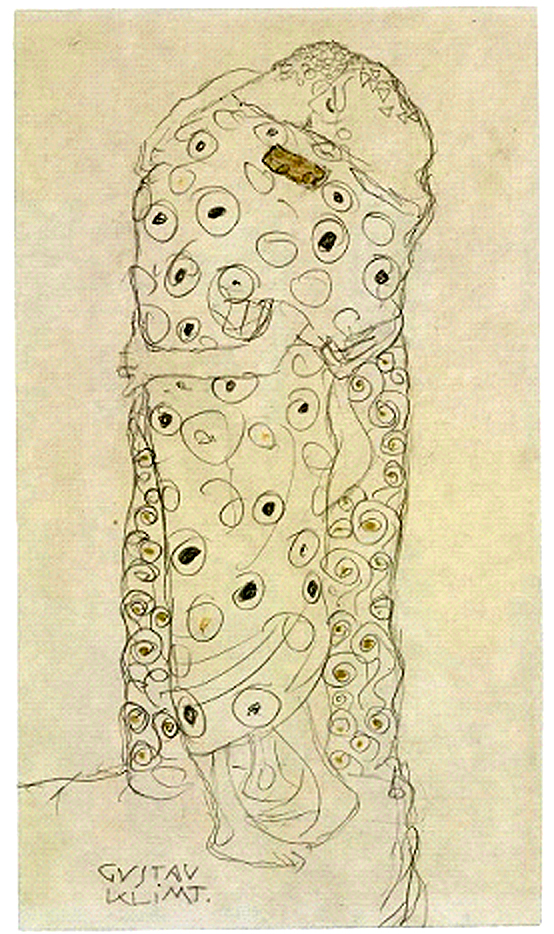 Gustav Klimt was not just richer but far more famous in their day, but he does not come well out of the contest in this exhibition of 100 drawings loaned by the Albertina. These are not the images for which he is most famous, the extraordinary Viennese society portraits of figures half dissolving into gold and jewels as if only their own wealth is keeping them vertical. Most of the works here, beautiful though they are, are working drawings in which he is trying out compositions – a rare finished work, probably made for presentation to a patron, also has the only tiny patch of gold in the entire collection.

The Schiele works are complete, and once he shakes off some of the Klimt influenced excessive elegance, they are astonishing. The subjects are brutally viewed, brutally executed with a savage spareness and brutally cropped so arms vanish at the elbow, legs mid shin. The poses must have been excruciating. Colour can be a weapon: a cellist’s arms are empty and instead of a musical instrument there is a great amber stain spreading up from his groin. Schiele, The Cellist, 1910. The nudes are less disturbing than many in which the garments – including a self-portrait with a dangerous shirt – seem to be assaulting them, hobbling their legs, binding their arms, threatening to strangle them. In contrast the Klimt drawings of smartly dressed women hanging nearby could be fashion plates for a magazine. 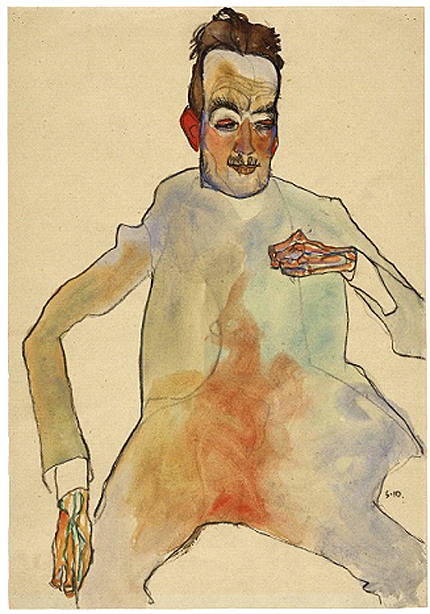 The most striking of the Klimts are his working drawings and preparatory sketches for an important commission for the university. It ended badly when his allegory of medicine, a waterfall of naked figures, child and adult, hale and mortally ill, was not well received. He was outraged and tried to cancel the contract and take back the paintings.

Again the contrast with the greatest troubles of his protégé is telling. Schiele’s unarguably sexualised drawings of very young girls disturbed his contemporaries and have troubled his biographers since: the exhibition is at pains to point out that the age of consent at the time was 14. It was never likely to go well when he moved with his lover and model from urbane but expensive Vienna to a country village. He was arrested for child abduction of one of his child models, and though cleared of that, convicted of exposing minors to obscene works – which were confiscated, with the judge very publicly burning one.

The five prison drawings exhibited, including a self-portrait with just an anguished face peering from the tangle of his grey blanket, were made when he thought he might spend the rest of his life in prison.

Information and Images are shared from an Article by Maev Kennedy, published in The Arts Desk on November 14th, 2018. Images Credit: Albertina Museum, Viena, 2018.