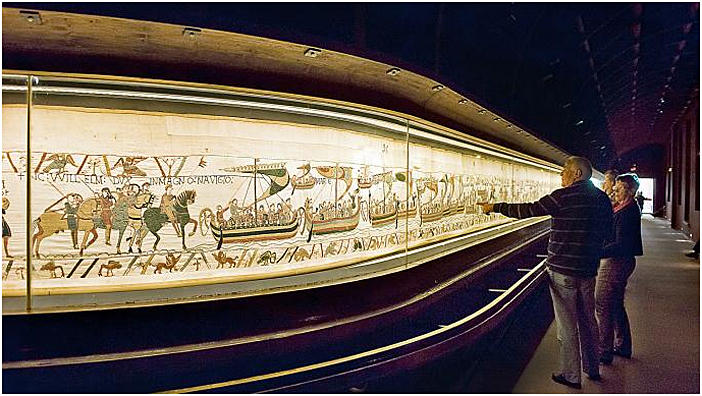 Bayeux Tapestry has had a purpose-built home since 1983, having once been kept at Bayeux Cathedral. Image Credit: Alamy, 2018.

Napoleon Bonaparte flaunted it to whip up enthusiasm for invading England. Heinrich Himmler tried to grab it for Nazi Germany and Britain failed to borrow it to celebrate the Coronation in 1953. Now the Bayeux Tapestry, the great graphic depiction of the Norman Conquest, is to cross the Channel at last — although it may really be a homecoming.

Some experts have long claimed that the distinctive Anglo-Saxon art of the 230ft-long work is proof that it was sewn in England after William of Normandy rolled up King Harold’s army at the Battle of Hastings on October 14, 1066.

The chronicle of William’s campaign is told from the Norman side, with bloody scenes of slaughtered English troops and Harold’s death with an arrow in the eye. But the enemy is treated with sympathy as its foot soldiers slog away against French horsemen behind walls of shields.

Scholars mainly believe that the 11th-century embroidery — it is technically not a tapestry — that used to hang in Bayeux Cathedral was ordered by Odo, the local bishop and half-brother of William. In France it is also still known as Queen Matilda’s embroidery because William’s wife may have ordered it to celebrate his exploits.

Given its fragile state, inflicted largely by past misadventures, a decision to ship the tapestry across the Channel would be a huge gesture towards les Anglais. Transporting it, however, would be a high-stakes logistical puzzle. It is vulnerable to many hazards including extremes of temperature, humidity, tearing, moths and even strong light.

It cannot merely be rolled up and carried on an aeroplane. A curator would have to accompany it and keep it in sight for the entire journey except for its time in the cargo hold. When the British Museum transported one of the Elgin Marbles to the Hermitage Museum in St Petersburg in 2014 its chaperone obtained permission from both airports to travel with the headless statue of the Greek river god so that she could see it travel up the conveyor belt at one end and down again at the other.

Conservators use crates within crates to keep the environment as stable as possible. The British Museum favours boxes that resemble the ones used in the Steven Spielberg film Raiders of the Lost Ark, in which the Ark of the Covenant is placed in a huge storage facility.

The tapestry is split into 32 scenes, the most famous of which for students of English history is the 31st, in which Harold is apparently shown plucking an arrow from his eye. The website of Reading Museum, which owns a replica of the tapestry, states that the impaled man cannot be definitively identified as the Saxon king.

“He seems to be shown twice: first plucking an arrow from his eye, and then being hacked down by a Norman knight. The tapestry is difficult to interpret here, but the second figure is probably Harold being killed.”

The final scene to survive depicts the victorious Normans chasing the defeated English from the battlefield, near the present-day town of Battle in East Sussex, but there was meant to be an additional scene that has been lost, the website states. “It may have shown William being crowned King of England. This would match the scene at the very beginning of the tapestry which shows King Edward, secure on the throne just two years earlier.”

Britain has always felt a degree of ownership of the visual narrative of the sequence of royal manoeuvring, travels and battles between the rival, and related, rulers of Normandy and England. A faithful replica was produced in Victorian England by Elizabeth Wardle, a Staffordshire embroiderer, in 1885 “so that England should have a copy of its own”. That is the tapestry that hangs in Reading Museum.

Britain last tried to borrow the tapestry to display at the Coronation in 1953, but the negotiations failed, said Antoine Verney, head of the Bayeux museum, which has been home to the tapestry since 1983.

There have been background discussions with the British but no decision on the details of lending the tapestry had yet been taken. “It’s not a project that is going to be decided tomorrow,” Mr Verney said.

The embroidery is undergoing long-term tests with a view to restoration before its move to a new building at the museum, which is to open in 2023. The culture ministry in Paris has been talking to Britain about a possible loan about that time and an announcement is expected at the Sandhurst summit tomorrow, officials have said.

The tapestry’s guardians are loath to let it out of their sight, given the damage it suffered in previous excursions.

The Protestant Huguenots came close to destroying it when they sacked the cathedral in 1562. In 1792, revolutionary soldiers confiscated it and tried to cut it up to cover their wagons but the operation was halted by a local police chief. Napoleon displayed it in Paris in 1803 to whip up anti-English feeling as he planned his invasion, which was abandoned the following year.

The tapestry was hidden during the Franco-Prussian war of 1870 and again in the First World War. In the Second World War its 58 scenes and 636 characters were taken to relative safety before the Allied invasion that laid waste to much of Normandy. The Gestapo grabbed it in June 1944 and three days before the Allies arrived in Paris in August, Himmler ordered its transfer to Berlin. The message was intercepted by code-breakers at Bletchley Park and the tapestry never left.

Officials at the museum said that further studies were needed to determine whether the tapestry was in a fit state to travel again.

Information and Images are shared from an Article by Charles Bremner, Paris | Jack Malvern, about The Bayeux Tapestry, published at The Times, London, UK,  on January 17th, 2018. Images Credit: Alamy, 2018.